The Android version of GymRats is now available to download from Google Play. It's not as fully featured as its iOS counterpart, but serves as a functional companion so our Android friends can now participate in challenges. Check it out. I plan to incrementally add features as long as people are using it. Thank you to everyone who emailed in asking for it.

In the past few months there have been many notable updates to the iOS app including: 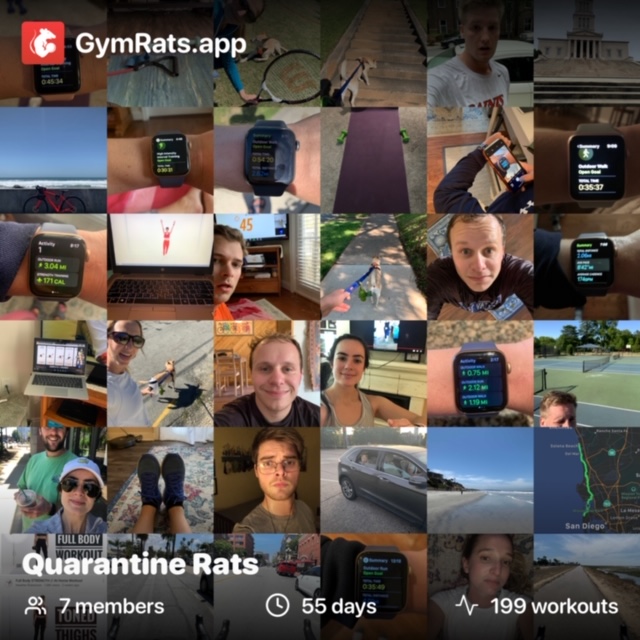 I think it's pretty cool and also serves as a natural advertisement for the app, which brings me to my next point: what's the future of GymRats? It's to keep growing in the same fashion as it has. Since the initial release a year and a half ago ~2,500 rats have participated in ~1,200 challenges logging a total of ~40,000 workouts... that's a lot of sweat! I think the app is serving well for groups who want to stay connected and motivated while being unable to meet in person.

I hope to continue to meet the needs of current users while also welcoming new ones. There are some exciting possibilities for improvements. Teams within a challenge? Publicly joinable groups? In-app GPS tracker? All on the docket. If you have any ideas, as always, feel free to email me.

If you want to follow along, there are a couple of ways to do that. I've created a Twitter account where I'll be posting feature updates and some rat related memes here and there. For example: did you know a group of rats is called a mischief? Feels appropriate. For the technical folk, GymRats' code is open source with development happening on GitLab. The issue board is sorted by priority and gives insight on what there is to do, what's in development, and what's done.